I was thinking about alternative ways of driving the second Z axis rod. Using two motors seems a bit redundant, and timing belts have to be the right size and can be tricky to source. This isn't much of a problem for most people wanting a 3D printer - but if you're experimenting with the technology then having something more 'reprapable' has it's advantages.

One way would be to use a gear train between the rods. This seemed like an interesting line to pursue, as it gave me an excuse to learn how to design gears, and what's the point of having a printer if you can't play a little. So, firing up Openscad and the excellent "Parametric Involute Bevel and Spur Gears" script from Greg Frost, I worked out how to build a set of gears to connect the rods on my test rig. I also put together a basic frame to hold them in place using Tinkercad (which coincidentally tested how big a part my Prusa can actually print). 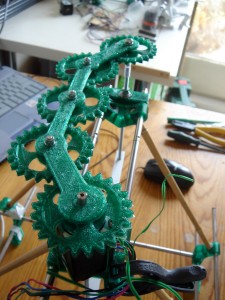 Having the gears in this curve was not actually planned to be honest (my calculations were a little off), but it did show a way in which access to extruder could be possible if they were mounted on the top of the machine - assuming some sort of guard around the gear mechanism.

Testing showed immediately a clear problem with this approach - backlash. The poor tolerances between the gear teeth accumulates along the train resulting in a noticable delay between the start of the driver gear and the start of the final driven gear when the direction of movement is changed. This is nicely shown in the video.

There's a few things to note:

The backlash problem seems horribly obvious with hindsight. Perhaps I could have worked it out from a bit more thinking, or from a bit of googling or asking on the forums, but by being able to quickly build a prototype I got to learn about making gears and think more about the problem than I would from just reading about it. And maybe posting this will help others in some way. The joys of 3D printing! 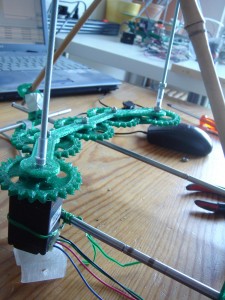 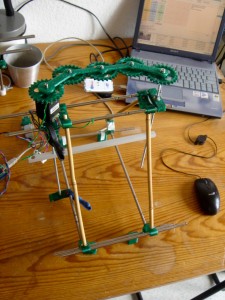 Alternate view from above