A little while ago I started work on a Thing Tracker Network (TTN) Client, with the intention of having at least a working beta before the end of the year.  This proved to be rather optimistic, and whilst the work is still ongoing, I thought it useful to write a post outlining the goals I have in mind, and the challenges I believe have to be overcome.  At this stage I believe the core design is reasonable, and so feel comfortable asking for opinions, feedback and help.

The client concept differs from many alternatives by it being a distributed system.  Whereas the majority (all?) of the existing 3D printing repositories require registration to a central service, this client, in conjunction with the TTN, requires none, and the various Things are stored in the network itself.  This brings several interesting challenges as I shall list later.

A few of the factor driving the design decisions are:

After several discussions with others about the design, the (current) outline of the client is as follows. 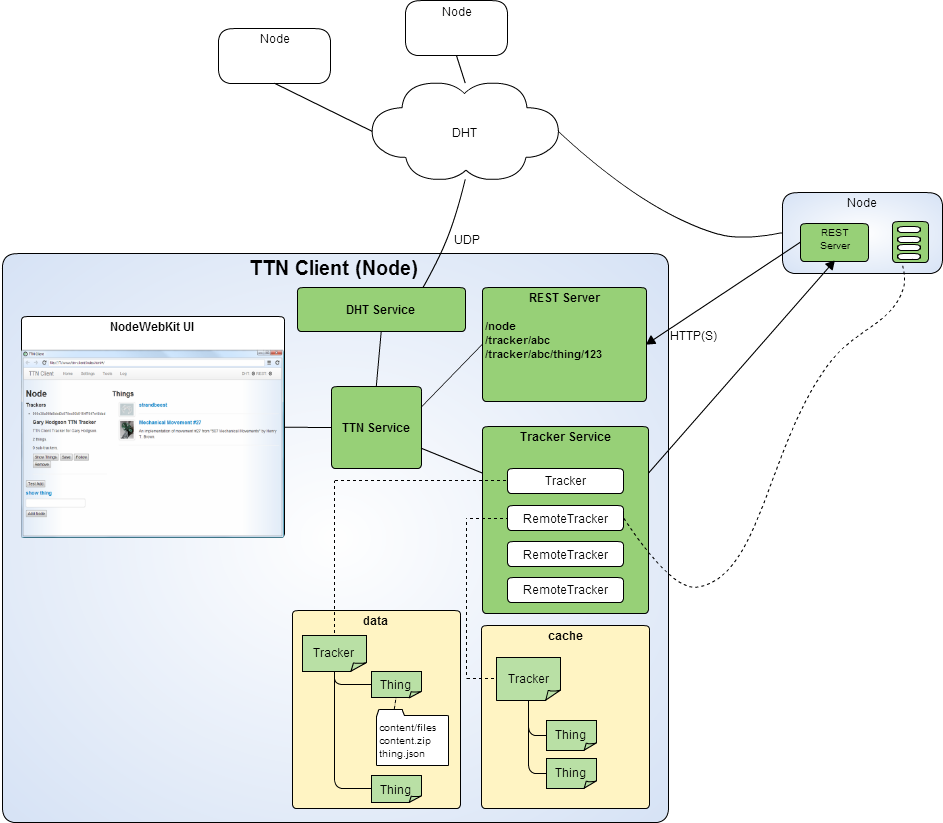 Even this simple sounding app brings with it challenges.

How to ensure that a node's content is still available even if the originating node is offline?

It has to be assumed that only a small portion of nodes will be online 100% of the time. This is where using BitTorrent for the content distribution might have a real benefit, besides resource sharing etc, as the content would be available on another network.

The current design allows for content files to be stored anywhere, and so they could be made available in the cloud (Dropbox, personal web server, etc), but it would make for a better user experience when such remote storage was seamlessly integrated into the client in some way.

My current thinking is that each person can opt to have their node act as a relay for other peoples trackers. That is, I might decide to store and make available the tracker and content for, say RichRaps, designs, and should he be offline when someone wishes to download one then the client could ask the network for alternative locations. This fits with my vision of an ecosystem building up around the TTN - where a variety of clients interact in different ways: relays, aggregators, filters, and so on. Someone may decide to donate resources to relay particular designs on behalf of the community, for example the RepRap project could run a client which acts as a relay for all RepRap designs. This would differ from existing offerings in that the original data remains linked to it's originating node for purposes of ownership and attribution, plus the data would be replicable by other nodes - i.e. the content is not exclusive to one particular server, rather it just happens to be regularly available at that node.

This is one of the major benefits of this design if we can pull it off: We shouldn't be dependent on the services of others. If a repository falls offline sometime in the future there should be enough redundancy in the network to ensure that designs remain available.

How to verify that a Thing originates from a given node?

The current design uses Public Keys and Signatures to build a web of trust within the network, to verify that a piece of information originates from the node it claims.  This is an area that will need a lot of work in order to make the system trustworthy.

How to store Things retrieved from possibly untrusted sources?

The app runs inside your network and has access to your local file systems, therefore it is very important that any interaction with external resources be controlled and secured as much as possible. For example, I expected my locally running Avast anti-virus to recognise when the client downloads an infected file, but preliminary tests seem to indicate this is not the case, at least with the original settings which do not scan every file by default. One might be able to use a portable virus scanner, such as ClamAV, but this may conflict with making the client easy to install, and is another component to have to manage.

How to announce new Things, or updates to existing Things, to the network?

This is an area I have yet to implement, but I suspect may turn out to be one of the more interesting parts of the client. Using a DHT to connect nodes may allow for interesting ways of passing information between the nodes. For announcing, some form of message passing approach may be best, or some form of publish-subscribe model. These updates could potentially be stored in the DHT itself.

How to discover new nodes?

The primary way of including new nodes would be by manually adding the node ID which is gained "out of band", via forums, blogs, etc. The client would then look up the information for the node, and optionally traverse the trackers (and nodes) that that node itself is following. I can quite imagine that if I were to start following RichRaps node then I may be interested to follow those that he is following too. In this way the network effect should yield a large set of possible trackers to follow.

An alternative way might be to have a "listening" mode for the client, which listens on the DHT for new nodes and adds them to a list to be reviewed whenever you wish. Furthermore there could be a "promiscuous" mode which listens for new activity and automatically adds the trackers and things it picks up to the local tracker. This is how I imagine an indexing or search-engine client might operate - trawling the network for new information. Again, by promoting the TTN specification, rather than any particular solution, the possibilities as to the type and function of the participants of the network are boundless.

How best to store Thing and Tracker data locally?

If a thing is updated regularly then how to efficiently record these changes without having many redundant copies cluttering the local harddrive? The immediate idea might be to use something like git to store local Things, but that again may conflict with the ease-of-use/installation driving factor.

How to handle the fact that Things may have multiple versions?
This adds another complication to the network, not only in terms of organisation and storage, as mentioned above, bit also in terms of hereditary and attribution. How can we effectively track the ancestors which make up a design?

How should the application look and feel? Could it be skinnable, open to extension, etc.?

By basing the design around the TTN, rather than a particular client, the hope is that others can take the client as a basis for their own designs, or build something from scratch. By making the information available over RESTful web services the barrier to creating a client is greatly reduced.

Interestingly the UI aspect of the client appears to take a large proportion of the time, not due to technical reasons, but because of trying to decide how to make the client accessible to non-technical people.

The application uses AngularJS for the front-end, and this certainly helps reduce the amount of boilerplate in getting the app up and running. 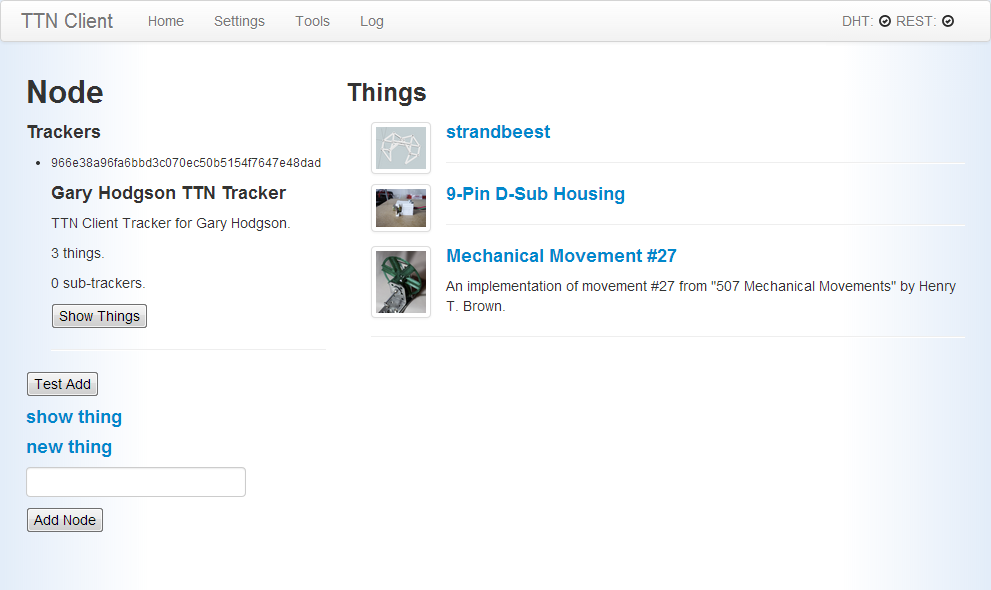 The above gives a slight indication as to the aspects that I have been considering, and this is by no means an exhaustive list. I'd like now to run through a use case to show how I imagine the client to work in practice. It is quite broad, but also dives deep into the technical details now and again to exemplify aspects of it.

The user then may choose to publish their own Thing in the network. 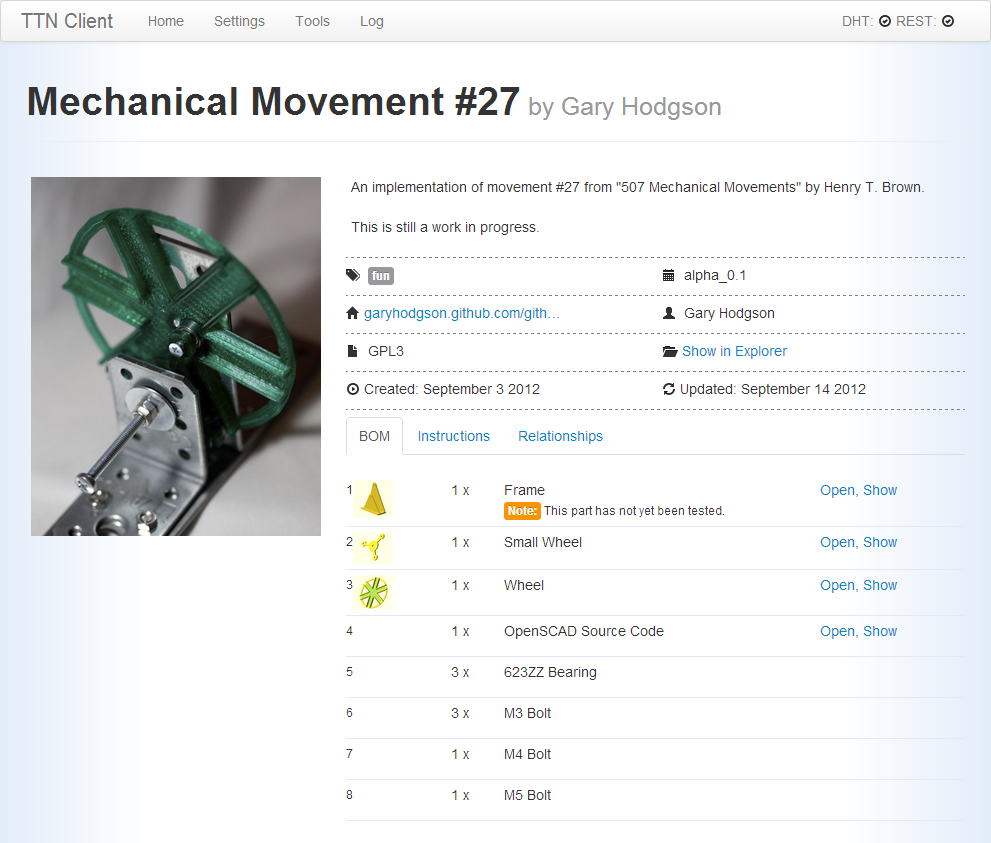 Hopefully this gives an indication of the factors involved in designing and producing such a client.  There's a whole lot more in addition to the above.  the challenge now is simply finding the time, and motivation, to produce a client that can at least give a reasonable experience for those willing to try it out.  I'm a firm believer that if the Thing Tracker Network Client can be made to work then it could make a huge impact in the maker world, bringing control back to the individual.

I should say that the code so far is available on Github, but I really can't recommend trying to use it (although I'll help anyone who wants to have a go) as the design is still in a state of flux, plus the code quality leaves a lot to be desired as several different approaches and techniques have been tried, and it really needs a good refactoring to make it a bit easier to delve into. However, with that warning, the project can be found here: https://github.com/garyhodgson/thing-tracker-network-client