One of the goals of my Mini-Mendel/Huxley build is to try and reduce the number of parts as much possible, so long as it does not make the build process too unwieldy. In the end I decided to abort the attempt but I wanted to document it here in case others find it useful.

For this reason, and also because the parts I am printing out are having under-sized holes, I decided to attempt to put the frame together without fastners at all. 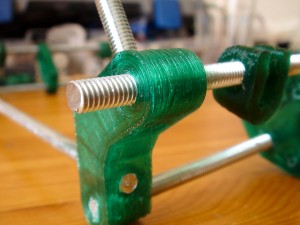 Things got off pretty well with the construction of the two end triangles. The trick to attaching the final vertex corner being to screw the final rod into the penultimate vertex hole a bit further - the width of the vertex. Then when screwing the rod back, into the final vertex hole, the pieces align correctly. 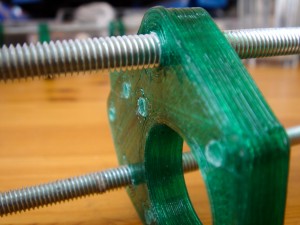 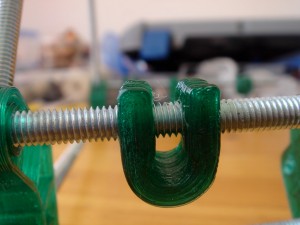 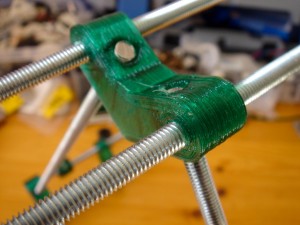 The most challenging part is finding the technique/strength to turn the rods into the plastic when there are other parts of the frame getting in the way. Getting a grip can be quite hard, and using pliers tends to break the thread of the rod, so is best avoided. I found that using my table top, rubber padded visem together with spinning the whole frame around it, worked pretty well, but it started to become quite cumbersome as the frame grew (even though the frame is not that big really).

Likewise, screwing on the Y-axis motor mount, and idler, took a bit of forethought - having to stagger the position of the part so that when the other rod is turned into place the original part is screwed to the correct place too. The real difficulty was how tight the rods were too turn into the plastic, and I was loath to ream them in case they became too loose and ruined the experiment. 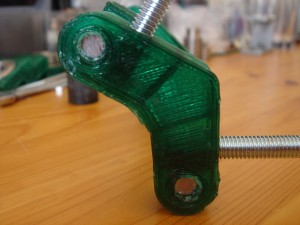 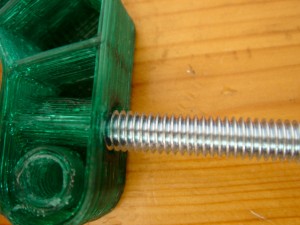 It was largely this that made me decide to call it a day and return to a more traditional construction technique. Spending several hours screwing in the rods makes you realise that a box of fastners really doesn't cost much at all! There is the additional disadvantage of not being able to easily disassemble the frame should something break, or if you wish to test a new part. 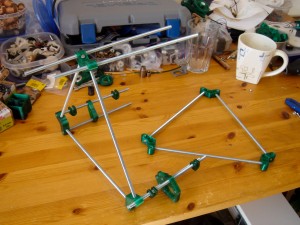 Reverting to nuts and bolts was, of course, a lot quicker. But I did keep the two frame triangles without fasteners as they were the correct lengths and seem very stable. As a parting shot I utilised some bar clip fasteners I salvaged from an old Xerox printer in order to increase the width of the printer. It seems to me that the Mini-Mendel bar widths in the BOM I found are a little short - but I will wait to see the printer finished before I decide for sure. 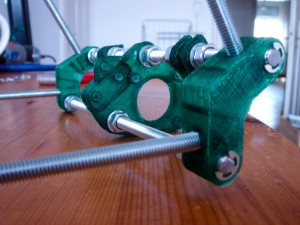