There was a recent thing on Thingiverse called the Vert-X-Belt-Truder by Johann which describes a way of moving the extruder motor off the carriage. The benefits are a lighter, and potentially faster, carriage. The Bowden cable is another way of achieving this goal. A comment by Martin Price (martinprice2004) caught my eye:

...keep the x axis as current prusa, but turn the extruder 90 degree around the z axis. Drive the extruder using a motor mounted at the end of the axis with a square or hexagon bar mounted horizontally. The extruder drive gear moves along the shaft when the x axis moves, but can still be driven by the motor at any point.

I had already done something similar for moving the X-axis motor off the carriage and so I quickly threw together a proof of concept to thrash out how a design would work. 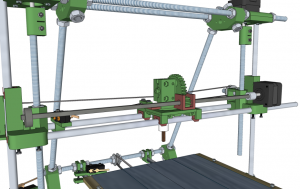 The results are shown in the following video (please excuse the varying focus, the many "er"s, and the fact the audio is muffled between 2:10 and 3:35 - I didn't realise I had my finger on the microphone - but I don't say much of value here anyhow, only that it seems to work and the drive gear moves through the drive shaft. Also that the test "print" is running at 200mm/s (travel:250mm/s))

I utilised the Compact Geared Extruder by Matt Roberts (Thingiverse) because it's small, modular, and as it is designed in OpenScad it's easy to hack with. I went through a couple of iterations to come up with a bracket that would hold the drive gear in place as the extruder moved along the square drive shaft. As I put the parts together I realised the same effect could be achieved using herringbone gears, so long as the drive gear is held close to the driven. The coupling is a rubber roller from an old Xerox laser printer, as is the square rod. The NEMA 11 motor is simply zip-tied to the X-axis motor end, and the idler is simply a bearing zip-tied to the X-axis Idler end. 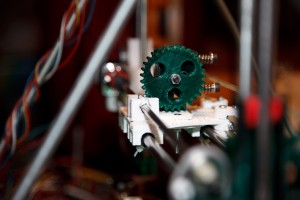 A few things I learned as I put it together which might be worth considering if anyone recreates this.

If I get chance to fix the hobbed bolt of the compact extruder then I will try to get this setup printing for real. Here's a couple more photos and videos just of the running. 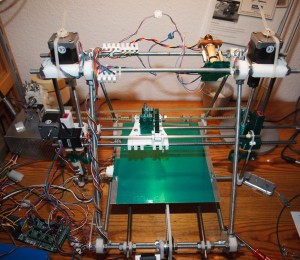 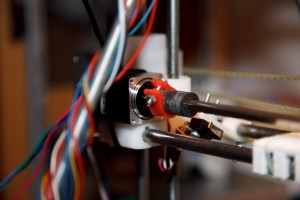 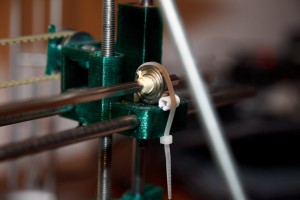 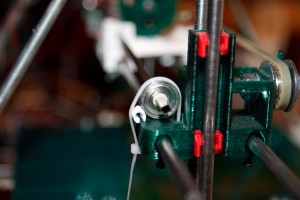