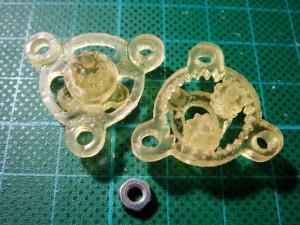 I had hoped to have some nice successful prints to show off but progress has been rather slow. Vat #2 also developed cracks shortly after the initial test runs. Whilst assessing the situation I made the uncomfortable realisation that the "perspex" I had bought was not actual perspex but rather polystyrene! A project manager from a previous job once dealt me some sage advice: "Assumptions are the mother of all fuck-ups". Here I had assumed that the transparent sheets of plastic at the local hardware store were perspex, because that's what I was looking for and that's all they had, and it certainly looked and responded like perspex. On making this realisation I fell immediately into a second trap - that the cause of the vat failure was due to the material. So I merrily went off and found some real perspex and rebuilt the vat, which promptly failed in exactly the same way!

I recount all of this because I find it interesting how we have to deal with such traps and set-backs as part of the development process. We constantly have to fight against our own hubris, ego, and our willingness to mislead ourselves as we try and maintain focus on solving the current problem, whatever it may be. Robert Pirsig wrote about set-backs and hang-ups, as "Gumption Traps" in Zen and the Art of Motorcycle Maintenance (PDF, p.139 onwards) and I am reminded of them often as I tinker.

So, after 3 failed vats, I actually started to consider that the design might be the problem. Some rudimentary research on working with acrylic showed quite clearly that it "has a high thermal expansion coefficient compared to traditional glazing materials and allowance within the frames must be made in both directions for thermal expansion and contraction". So the rapid heating of the center from the reaction in the resin, together with the use of bolts through the material, was a recipe for disaster. I had, once again, assumed that my memory of working with perspex (at school, so now a few years ago) was accurate and that it would tolerate such temperature changes and design. It was only after these failed attempts that my hubris was sufficiently dented that I was forced to question my assumptions and check, and double check, my work. 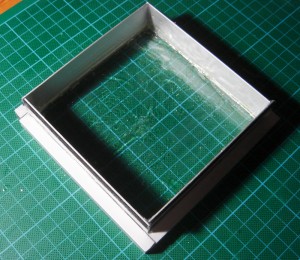 Build #4 removes the bolts and leaves some allowances around the edges for the thermal expansion. It uses aluminium U-bar to "clamp" the PTFE foil between the L-shaped walls and the perspex floor. All held together with a generous amount of silicone. It's still far from perfect, but at least so far it hasn't developed cracks! The main problem I foresee is that any damage to the foil will mean having to destroy and rebuild the whole thing.

I also built a second base from copper pcb. So far it seems to hold the parts enough for the duration of the print and they can be easily scraped off afterwards. 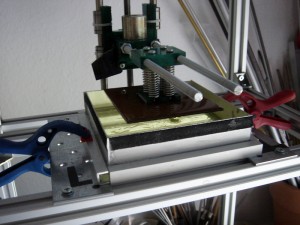 New vat and base

During the times that I did have a vat, I attempted the Tiny Planetary Gears by Auebenc. I'm still waiting for my pigment to arrive and so am still trying to judge the cure depth of pure resin by timing alone. Because of this I wasn't expecting a working print (which I indeed didn't achieve) but I think the model shows the potential of what the printer will eventually be able to do. 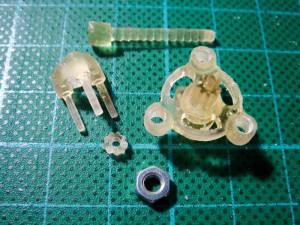 The above print would have been great however I had reduced the X/Y scale to 50% but failed to reduce the Z layer height, and so it is elongated x2 in the Z direction. I think I will have to put a reminder message in the host, or do something automatically, as it is all too easy to forget a variable whilst making adjustments such as this. 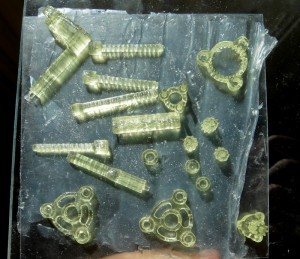 Sunning the parts as a post-cure 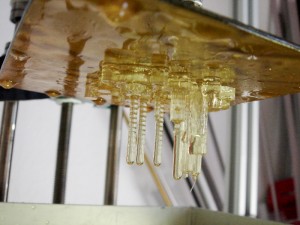 Fresh from the vat 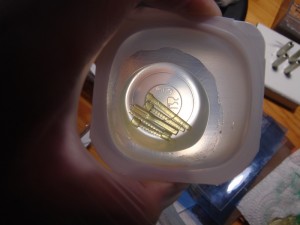 Tony Buser asked what the durability of printed parts is like and I replied that the belt pulley from the first test run certainly appear to be strong enough to use in that capacity, and these prints remain as strong now. One thing I did discover whilst attempting to clean up some of the planetary gear parts is that the material is very brittle directly after printing, and even after a couple of minutes under a UV lamp. When I tried to enlarge screw holes the resin cracked or crumbled quite easily. However it has to be noted that the models were ridiculously small (I printed at 50% and 80% of the already tiny size), plus I think that allowing the models to cure over time makes them stronger. 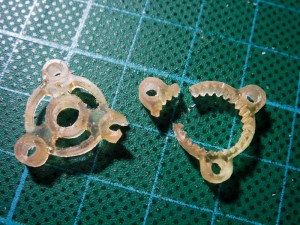 Another thing worth remembering is that spotamaterials also offers harder, more robust resins - Spot-HH and Spot-HT. I will no doubt be trying this sometime soon.